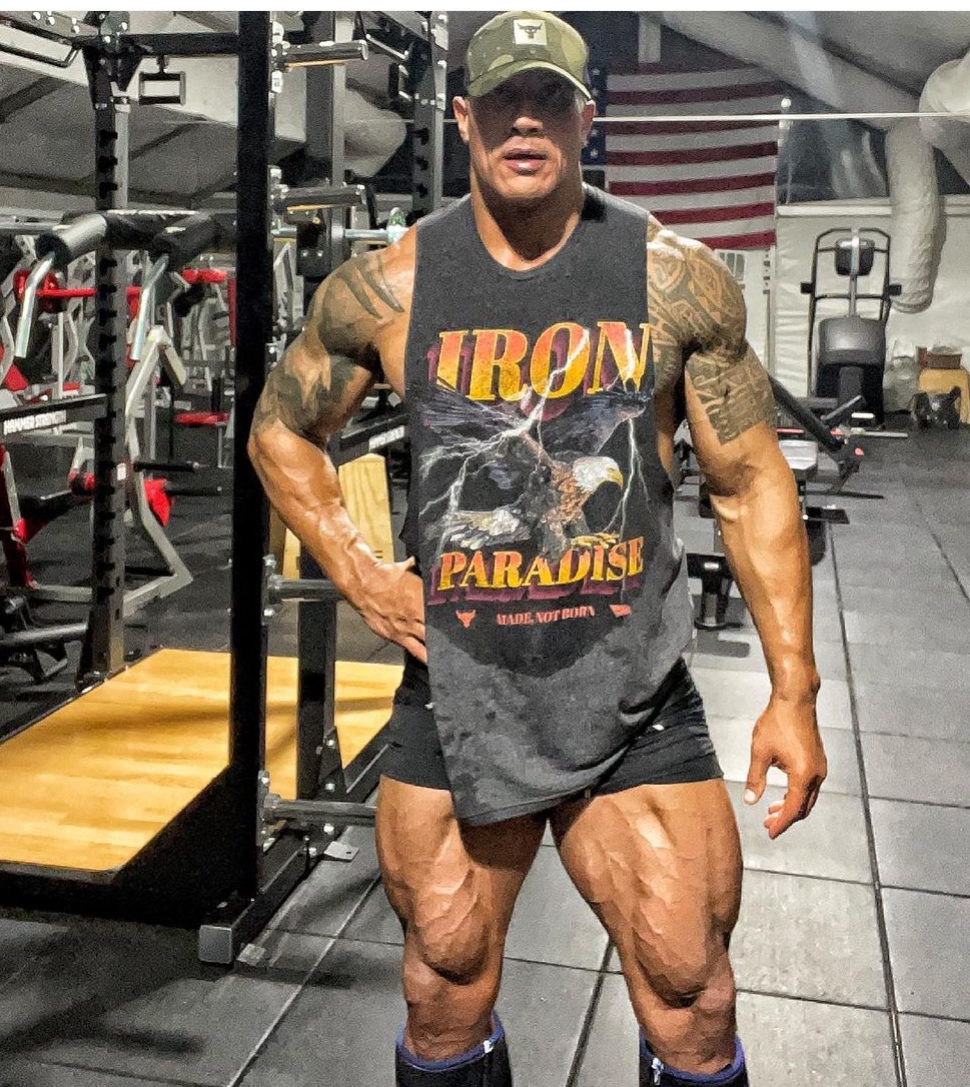 The Rock posted a new picture and he looks Jacked with muscle all over his body, most importantly his legs is in the best shape it has ever been since The Rock’s Wrestling career and now in Hollywood.

The Rock’s movie ‘Black Adam’ will be released soon, he’s been sweating over the last few months trying to build his body to be in the right shape possible, he said “Late night training 🕛🔥

Big week for #BlackAdam shooting my “champion” scenes with my shirt off and showing my body.

Been working extremely hard dieting, training and conditioning unlike any other role of my entire career.

Manipulating water, sodium, cardio but also having to push and pull real iron to have dense, dry, detailed muscle.

It’s a real science that takes months and months to dial it all in with my strength & conditioning coach @daverienzi who keeps a very watchful eye, constantly fine tuning our strategy daily.

As many of you know, the intense (and exciting) comic mythology of Teth Adam – he becomes the immortal “champion” by the Gods.

Blessed with the powers of Superman and dangerous magic from the wizards.

Big week, grateful for the grind & support – here we go🤞🏾”

He expressed the pain and dedication he is going through to make it work, which he is supposed to so as to give his fans the worth for his money.

Watch Shakira’s Work Out Her Legs In New Videos

Watch Ciara Show Off Her Dancing Skills In New Video

Ciara shows off her dancing skills in a video she posted on Instagram, once again her fans like it so they complemented her and told her to do one of the things she knows how to do best.

Ciara is putting on a black gown while rocking to the sweet sound coming out fron her speakers, this shows she is multi talent and and not just good as a musician but also good as a dancer.

From the looks of things and positive reply she got from fans it seems Ciara should do more of these dance videos, since it doesn’t take a lot of stress making it or maybe it is a little bit hard but her talent made it look so easy.

For  Ciara someone who married Russell who she describes  as an amazing husband and also have a wonderful kids with him, she have every reason to dance and be happy on social media.

See video of Ciara dancing below;

Now that’s lovely for Ciara, more happy vibes to her.

His fans shared videos and pictures of Tupac Shakur, but an interesting one amongst all of the written love letter Jadapinketh shared and said Tupac wrote to her during his lifetime.

Fans didn’t take it lightly, some said it’s not right for a married woman to hold on to letter a man wrote her, while some supported her especially fellow women, a girl said she would do the same thing Jadapinketh did if Tupac wrote her a letter by preserving it.

While controversies of the trend was going on a fan said Jadapinketh wrote that letter by herself that’s she is only chasing clout.

See fans reaction to the Jadapinketh letter from Tupac below;

It’s Tupac, I would too

Will smith waking up every year on June 16th: pic.twitter.com/ImgVmzGfTX

Watch The Video Of ‘Lumberjack’ Tyler The Creator’s New Song

watch the video for Tyler the creator new song ‘Lumberjack’ h e posted the video on YouTube and also promoted it on his  Instagram and twitter page.

Watch the the Lumberjack video below;

This song came out a day after Tyler The Creator posted a video of himself kissing a girl, hopped right inside his car and drove off I guess he did it to prove those who thinks he is gay wrong, even though the video was trending some fans believe Tyler is still gay so he is bisexual.

Tyler the Creator have built a huge fan base by just being himself which is more of standing out from other artist, his albums is grammy worthy and ‘Igor’ which is his last album won his first grammy award and his fans thinks he will still win more of it.