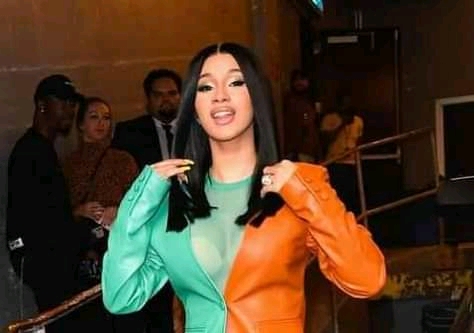 Cardi B is not only working on a new album, but she also revealed that she is attempting to return to college to obtain a degree!
Cardi B is motivated to disprove her detractors by rebounding back from her second pregnancy and reclaiming her place on the charts.
Cardi B just announced that she and her Migos star husband Offset are expecting their second kid, but that hasn’t impacted her outlook on her business.
Instead, she retaliated against veteran rapper Joe Budden, who indicated she wouldn’t make another album once she had two children.
In response to the criticism on Twitter, the fiery actress stated that she will be back in the studio in no time, while also expressing her ambition to pursue a college education.
“Well, he’s deada** wrong…,” she wrote. When I deliver this baby, I’m going to Colombia for 6 months to get a lipo, breast reduction, learn how to pole dance again, learn how to play s####, and finish my political science degree before releasing my record… He’s going to (be) wrong, muahahaha.”
Cardi B had plastic surgery in the past to help her regain her figure after the birth of her daughter Kulture, who turns three this month.
Senator Bernie Sanders of Vermont has long been a supporter of Cardi B.
In 2019, Cardi B interviewed Sanders about police brutality, immigration, health care, student debt, and other issues.
Cardi B also endorsed Joe Biden, the current vice president.
She also conducted an interview with the President and was scheduled to play her bawdy song “WAP” at his inauguration, but she was unable to do so due to a medical emergency.

Related Topics:Cardi B
Up Next