How old is Keanu Reeve’s Girlfriend?

She was born on 4th April 1973, The relationship between Keanu Reeves and Alexandra Grant is still going strong.

On Saturday, the 57-year-old actor and artist attended the MOCA Gala 2022 at The Geffen Contemporary at MOCA in Los Angeles, making a rare red carpet performance.

The couple started dating in 2018 but kept their relationship a secret.

In May 2019, Keanu and Alexandra visited a benefit at the Los Angeles Museum of Contemporary Art together, but people were unaware they were dating.

During their next red carpet appearance in November 2019, the twosome made matters public by holding hands and gazing adoringly at each other at LACMA’s Art Film Gala.

Keanu Reeves, 57, and Alexandra, 49, have been dating since 2018, even though the actor and the visual artist have known each other since 2009.

Alexandra Grant’s art book Shadows, which contained her images of Keanu’s shadow in various stances, was published four years later, and the two cooperated once more on it. For each photograph, he wrote flowery descriptions.

Keanu Reeves and Alexandra Grant collaborated so effectively that they founded X Artists’ Books in 2017.

How old is Alexandra Grant? 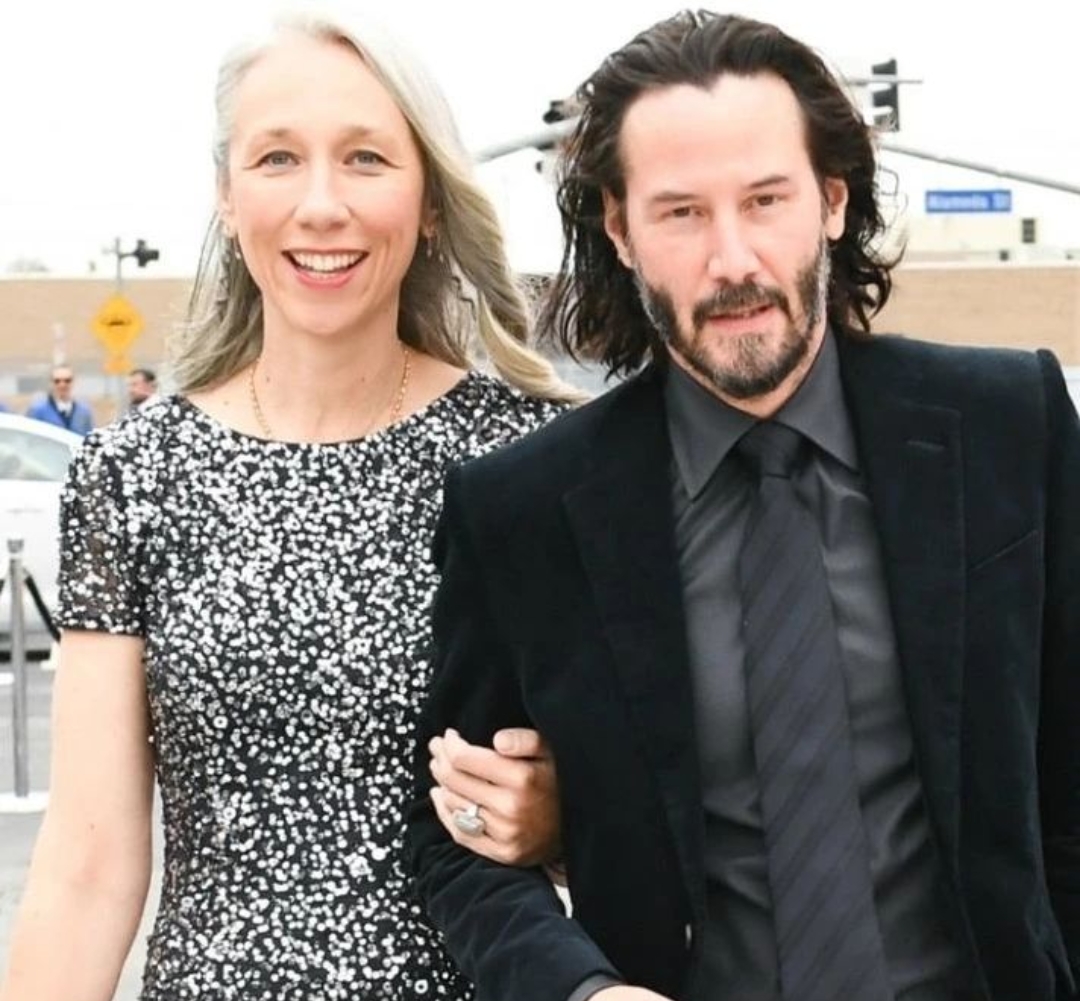 Alexandra Grant and Keanu Reeves teamed up again in 2016 for Shadows, a book, and series of photographic pictures published by Steidl in Germany. ACME Gallery in Los Angeles and Ochi Gallery in Sun Valley, Idaho hosted exhibitions of the pictures.

Grant collaborated with artist Alia Raza for Issue magazine as part of the book’s release, which incorporated fashion and shadows.

The two clasped hands and stared at each other tenderly while posing for photographers. In a navy suit with a white button-up and a navy-and-burgundy striped tie, Reeves looked smart. Grant wore a stunning crimson gown. The duo has been working together for a long time.

According to British Vogue, Keanu Reeves and Alexandra Grant co-founded the publishing business X Artists’ Book and published their debut book, “Ode to Happiness,” in 2011.

Alexandra Grant and Keanu Reeves did, however, make news in November 2019 when they visited the LACMA Art + Film Gala in Los Angeles. Reeves and Grant confirmed their romance by walking hand in hand on the red carpet.

“I think everyone I knew phoned me in the first week of November, and that’s fascinating,” she told British Vogue in March 2020, referring to their headline-making debut as a pair. “However, in all of this, the question I’ve been asking is, ‘What is the chance for good?’

How old is Kim Reeves?

Kim Reeves was born in Sydney, New South Wales, Australia, on September 16, 1966. Kim’s childhood was challenging because her parents split when she was young. Patricia Taylor, her mother, served as a starlet. Samuel Nowlin Reeves, Jr., her father, had a proclivity for attracting trouble, drugs, and alcohol.

Kim, her mother, and her brother went to Sydney, then to New York City, before staying in Canada, following her parents’ divorce.

Because of her performing profession, she spent most of her youth in Canada before returning to America.

Kim Reeves is a Canadian actress who first appeared in the martial arts film ‘Samurai Vampire Bikers in 1992.

Kim is best recognized for being the younger sister of Keanu Reeves, a well-known Hollywood actor. After acting in ‘Samurai Vampire Bikers from Hell,’ Kim wrote, produced, and, featured in the 2002 romantic comedy ‘Love Don’t Come Easy.’ She portrayed the character of ‘Nikki’ in the film, and critics praised her acting abilities.

In the Reebie Sullivan-directed film, which also starred Christopher Atkins, Kim took on the hard part of a lady who defies her aunt’s decision to play matchmaker. Kim’s acting career was cut short when she was stricken with cancer and had to deal with the consequences.

Who is Keanu Reeve’s wife?

Keanu Reeves does not have a wife as of recent.

It appears confirmed, that Keanu Reeves will walk down the aisle with his long-term girlfriend, Alexandra Grant.

On the red carpet at the LACMA Art + Film Gala in November, Reeves was seen holding hands with Los Angeles-based artist Alexandra Grant. For those who don’t make a living researching celebrity relationship statuses, Reeves and Grant have indeed known each other for just over a decade, and have been engaged for years.

Grant also talked about the first time the couple collaborated on a book, Ode to Happiness, in 2011, in which Reeves’ words are paired with Grant’s paintings. “I made the book as a private gift for Keanu as a surprise,” she explained. “When I delivered it to him, all our friends in the room burst out laughing, and they said, ‘Please publish it!'” That’s how we got our start in publishing.”

Tilly believes they are made for each other.

“I saw him at her last art opening, and he’s not looking for the limelight,” she explained. “He’s a low-key guy, too, and I think the reason everyone went crazy is that they’re sort of the perfect couple.” “I believe everyone wishes they had something similar. It’s hardly a glitzy Hollywood love story.”

“I remember [Grant] saying, ‘Keanu Reeves is my boyfriend,’ maybe a year and a half ago, and I was like, ‘Wait.’ What? What? “What?” she remembered thinking. “I thought she was a lesbian since she seemed so cool.”

No, Keanu Reeves is not yet married to Alexandra Grant although the duo is dating.

Alexandra Grant is an American visual artist who investigates language and written texts through painting, drawing, sculpture, video, and other mediums. She uses language and discussions with writers for the majority of her work.

studies the writing process and ideas based on linguistic theory as they apply to art, creating text-influenced visual imagery as well as cooperative group installations.

Alexandra Grant is based in the city of Los Angeles.

Alexandra Grant has held the position of professor. She was an adjunct lecturer at Art Center College of Design from 2009 to 2011. (Pasadena, CA).

Grant was a consultant in the Pacific Northwest College of Art’s Distance MFA program from 2013 to 2014 and taught an MFA course at Cal State Northridge in 2010. Grant was an MFA program mentor at Syracuse University in 2015, and he co-taught a course at Ashesi University in Accra, Ghana, with Isabelle Lutterodt.

Who is Keanu Reeves Married to?

Keanu Reeves is married to one at the moment.

But Keanu Reeves has a strong relationship with Alexandra Grant.

In March, Reeves was observed browsing for diamond rings in Los Angeles, prompting much curiosity, and an inside source later verified to OK! that the rumors were true: Reeves and Grant are planning to marry soon.

In March Keanu, Reeves was observed browsing for diamond rings in Los Angeles, prompting much curiosity, and an inside source later verified to OK! that the rumors were true: Reeves and Grant are planning to marry soon.

Keanu Charles Reeves, who was born in Beirut and raised in Toronto, began his acting career in theatre and television before making his feature film debut in Youngblood (1986).

He made his film debut in the science fiction comedy Bill & Ted’s Excellent Adventure (1989), which he reprised in the sequels.

He received critical acclaim for his turn as a hustler in the independent drama My Own Private Idaho (1991), and he established himself as an action hero with leading parts in Point Break (1991) and Speed (1992). (1994).

Does Keanu Reeves have a child?

The actor from Canada was never married. Despite this, he was previously married to Jennifer Syme and is now dating Alexandra Grant. In 1998, Keanu met Jennifer Syme at a gathering for his band Dogstar.

Keanu Reeves and Jennifer Syme fell in love and started dating, and their relationship resulted in the birth of Ava Archer Syme-Reeves, who regrettably died during delivery.

Does Keanu Reeves have a daughter?

Regrettably, the Canadian actor is a single parent. Jennifer Syme, Keanu Reeves’ late girlfriend, gave birth to a daughter who died at birth. Ever since no further children have been credibly linked to the actor.

Jennifer Syme was eight months pregnant when she gave birth. Unfortunately, the infant passed away during the birthing process.

Keanu Reeves and Jennifer Syme split up after a few weeks but later reconciled. Unfortunately, she died in a car accident as well.

No, Keanu Reeves is currently not Married.

Keanu Reeves was once married to Jennifer Syme

Reeves met Jennifer Syme, director David Lynch’s secretary, at a party thrown for his band Dogstar in 1998, and the two began dating.

Jennifer Syme gave birth to the couple’s stillborn child, Ava Archer Syme-Reeves, on December 24, 1999, eight months into her pregnancy. After a few weeks, the couple split up but later reconciled.

Jennifer Syme was murdered after her car crashed with three parked cars on Cahuenga Boulevard in Los Angeles on April 2, 2001.

Keanu Reeves revealed to investigators that they had reconciled.

Keanu Reeves called the Los Angeles County Coroner’s Office the next day, asking if Syme was there, according to Lt. Mac Willie.

Keanu Reeves has also been associated with model-actress China Chow and close associate and screenwriter Brenda Davis, whose child he is godfather to.

At a dinner gathering in 2009, Keanu Reeves met Alexandra Grant, with whom he later collaborated on two books.

Are Keanu Reeves and Winona married?

Keanu Reeves has responded to claims that he and Ryder are married, claiming that actual priests officiated the wedding scene in Romania for Francis Ford Coppola’s 1992 movie “Bram Stoker’s Dracula.”

In an Esquire video, Reeves claimed, “We did a whole take of a marriage ceremony with actual priests.” “We’re [married], according to Winona. We are, according to Coppola. So, I guess we’re married… in God’s eyes.”

When the two stars spoke to Entertainment Weekly in 2018 to promote their rom-com “Destination Wedding,” Ryder stated that she believed the two had married.

Winona Laura Horowitz, known simply as Winona Ryder, is an American actress who was born on October 29, 1971. She gained notoriety in the 1990s for her more varied roles in shows of various genres, having started off portraying eccentric roles. She has garnered a Golden Globe Award, a Screen Actors Guild Award, and nominations for two Academy Awards and a BAFTA Award, among other honors.