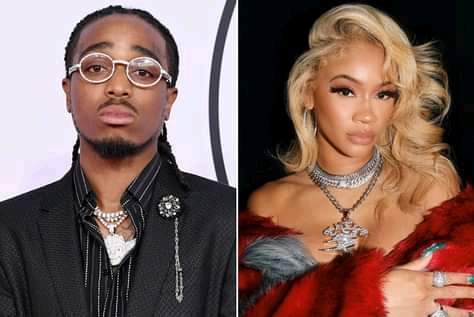 SAWEETIE CALLS CAP ON RUMORS OF SPENDING TIME WITH QUAVO

Saweetie and Quavo split in the spring, and specifics of their current status had been limited until this week, except from a few errant shots from the latter.

According to Hollywood Life, the two were “quietly spending time together again” following a five-month breakup. Saweetie moved to Twitter to share the article and inform her followers that it was cap.

Saweetie wrote, “Pinocchio ass article.” “Anyway, back to this #saweetiemeal,”

McDonald’s’ Saweetie meal is currently one of their most popular menu offerings. Saweetie and McDonald’s have now revealed new gear to commemorate the meal collaboration, demonstrating that they are still icy.

Trucker hats, Saweet Tea, and colorful oversized hoodies are all part of the new product line. Saweetie’s love airbrush is featured prominently in the unisex collection. Her love of sports, palm trees, and the meal, including the Saweetie ‘N Sour sauce, is reflected in more than ten colorful and pastel-colored designs.

“Now that you know how I keep up with the current trends, it was only fitting that I drop some frosty merch to honor my McDonald’s collab,” Saweetie stated. “I adore big pieces, such as the Saweetie ‘N Sour Hoodie and Fry Tees, which are two of my favorites.”

The collection is available at icybysaweetie.com, and you can view some of the pieces below.