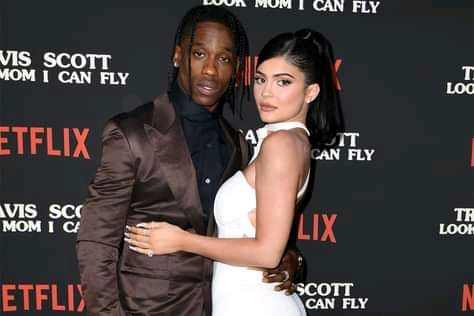 Travis Scott, Kylie Jenner’s boyfriend, “smells like pot a lot,” according to her.

When the beauty mogul, 23, made the disclosure, she was answering questions about her life in an interview with Ellen DeGeneres.

Kylie was asked what Travis, 29, smelled like while appearing beside the couple’s three-year-old daughter Stormi Webster, who sat on her lap during the interview.

She began by complimenting him, saying he smells like cologne and showers every morning, before adding that he also smells like marijuana.

“He generally showers in the morning, so he smells like a fresh shower and fresh cologne,” Kylie explained.

After that, the mother-of-one responded to a question about her guilty YouTube pleasure, which she revealed to be watching makeup tutorial videos.

However, Kylie returned to the question about Travis’ scent after changing her mind.

“Wait, he also smells like weed a lot,” she continued.

Ellen’s official Instagram page shared the video, which had the account’s fans in stitches.

“However, the finish,” one said, accompanied by five tear laughing emojis.

“Omg she claimed he smells like cannabis, I adore it,” wrote another.

“Wow lmao she could’ve left the weed out s**t,” a fourth wrote.

Kylie also discussed becoming a mother to Stormi and shared some of her pet peeves.

“Recently she’s very into M&M’s,” Kylie replied when asked about the greatest mess Stormi had ever made.

She gets the M&Ms, melts them in her hands, and then you spread it all over my white couch, huh?”

Kylie also mentioned that the strangest fear she has is swallowing dust from a dirty cup.

When Kylie asked who loved Stormi the most, she replied, “Daddy!”

Stormi, she added, is the nicest gift she’s ever received from Travis.

The Keeping Up with the Kardashians actress began dating Travis in 2017, and the couple welcomed their first child, Stormi, the following year.

They split up in 2019, but reunited after quarantining together for Stormi’s sake during the coronavirus epidemic.

Fans had been speculating for months that the couple had reconciled before it was confirmed early this year when Kylie began posting about Travis on social media.

THE WEEKND TO BE AWARDED QUINCY JONES HUMANITARIAN AWARD